This past Saturday, I had the pleasure of participating in the 8th Annual Princeton Book Festival. It’s always a lovely day of friends, colleagues, children, and literature, and this year was no different.

There were SO MANY authors and illustrators there this year — 80 in total! — that I could not keep track of them all, but here is a list of a few can’t-miss books from the Festival (in no particular order) that were also written by some pretty nifty people: 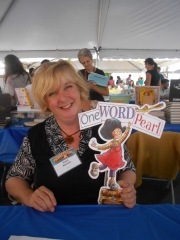 Pearl loves words, but she only uses one word at a time until one day she is at a complete loss for words.  After days of nothing to say, Pearl has a dream that teaches her words are all around us.  The dream comes true and changes her from One Word Pearl to a gazillion word girl.  The book will entice children into the discovery and power of words and what they are capable of accomplishing. 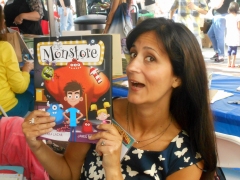 The Monstore is the place to go for all of your monsterly needs. Which is perfect, since Zack definitely has a monsterly need. The problem? His pesky little sister, Gracie, who never pays attention to that “Keep Out” sign on Zack’s door—the one he has made especially for her. But when Zack’s monsters don’t exactly work as planned, he soon finds out that the Monstore has a few rules: No Refunds. No exchanges. No exceptions.

When ten-year-old Cora and her family leave their home in Missouri, their hearts are filled with the hopes and dreams of a bright future gleaming with promise and opportunity. But the journey west by wagon train is harsh, and tragedy strikes swiftly and unexpectedly. Now Cora and her father must steel themselves for a different future from what they had carefully planned. How can they move forward when their hearts are broken? But move on they must, and Cora takes comfort in her new baby sister (named Susan after the black-eyed flowers). When Cora learns she and Susan are to be separated at the end of their journey, she looks to the past to help craft a link to their new lives. 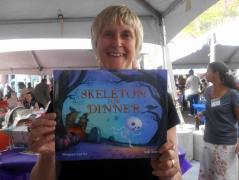 Big Witch and Little Witch have made stew, and now they want to have their friends for dinner! But when Skeleton mistakes the guest list for a menu, he takes off running, and soon Ghost and Ghoul join him too! But poor Little Witch has no idea there’s a misunderstanding. Luckily there’s one creature in the haunted forest who can help everyone figure it all out.

When Vinnie, a crazy-happy dog, gets lost while visiting a nature preserve with his family, he finds comfort in the company of Bogart, a big, lazy rhinoceros. Vinnie loves his new friend, but Bogart would rather just take a nap. A friendship soon blossoms-even if Vinnie’s definition of “friendship” is very different from Bogart’s-and when word of their unique situation spreads, Bogart and Vinnie are a worldwide sensation! But as soon as their fifteen seconds of fame ends, what’s left is a bond even Bogart can’t ignore. 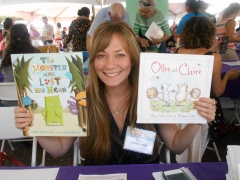 Tiffany Strelitz Haber, OLLIE AND CLAIRE and THE MONSTER WHO LOST HIS MEAN

Ollie and Claire are as tight as two friends can be. But when Claire longs to break free from this routine and dreams of traveling the world, she worries that Ollie would never join her. So she takes matters into her own hands and finds a mysterious travel partner when she sees a sign posted on a tree. Who could it be? And how can she ever tell Ollie?

Everyone knows that the M in “monster” stands for MEAN. But what happens when a monster can’t be mean any more? Is he still a monster at all?

Of all the creatures in the ocean, sea horses are Echo Reef’s favorite. They’re sweet and gentle and they glide through the water so gracefully. When Echo discovers that Rocky Ridge, one of her Trident Academy classmates, has his own pet sea horse, she wants one right away. Not everyone agrees sea horses should be pets, however—perhaps they are happiest when swimming freely. But Echo thinks that if Rocky can make a sea horse happy, she can too! Can’t she?

One day, a boy and a robot meet in the woods. They play. They have fun. But when Bot gets switched off, Boy thinks he’s sick. The usual remedies—applesauce, reading a story—don’t help, so Boy tucks the sick Bot in, then falls asleep. Bot is worried when he powers on and finds his friend powered off. He takes Boy home with him and tries all his remedies: oil, reading an instruction manual. Nothing revives the malfunctioning Boy! Can the Inventor help fix him?

Leeza Hernandez, NEVER PLAY MUSIC RIGHT NEXT TO THE ZOO

Oh, children! Remember! Whatever you may do,
Never play music right next to the zoo.
They’ll burst from their cages, each beast and each bird,
Desperate to play all the music they’ve heard.