A lot of smart women feel the same way I do. And it turns out that our inability to face losing might be what is holding us back.

The data shows that in elementary school, girls get better grades than boys, with both performing equally well on standardized tests. But by the time they get to high school, boys open up a lead in standardized test scores – an average of 33 points higher than girls on the SAT – even though girls graduate high school with a higher average GPA.

After we move on from high school, things get worse. Girls – or, women, rather – really start to lose ground to men. In the US, women represent almost 60% of college students but later earn roughly 77 cents for every dollar earned by white men. Although 54% of advanced AP/Honors math students are girls, fewer than 25% of STEM (science, technology, engineering, and math) jobs are held by women. Even without citing hard statistics, we all know that when it comes to leadership, managerial, or executive positions, women lag behind men significantly.

As parents and educators of Nerdy Chicks, there are many issues that lead to these gaps in achievement that we cannot change in a day (or in a single blog post). But there is one thing that we can start to address that could quite possibly make a difference: the way we give our Nerdy Chicks feedback on their academic performance. 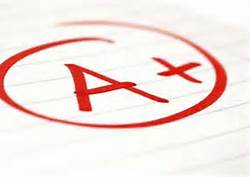 One theory about why girls do better in younger grades has to do with the ability of girls to perform well at the social side of education. Girls learn self-control earlier, follow instructions better, and generally behave in more acceptable ways than boys. In other words, they are “good.” Probably, these things collectively help them learn better, and often, they get praised for their academic performance in a way that is linked to their “goodness.” When you tell your daughter that she is very smart or a great student, it can start to sound like being smart or being a good student is something innate, something she was born with, something that is as much a part of her as her hair color or her nose.

For the record, I’m guilty of doing just this. I have often told my daughters how smart they are in the same breath that I tell them how beautiful they are. Even though one is changeable and the other is inherent.

The feedback that we give boys is very different. Because boys are often less conscientious, they are encouraged to try harder and put in more effort. The result is that boys learn that trying hard or putting in effort is far more important that what grade you get. Over time, this might be what accounts for the ability of boys to succeed.

Studies have shown that when students face advanced material that doesn’t come easily, boys react to the difficulty by continuing to try hard and put in an effort. Girls, on the other hand, may view the difficulty as a sign of the failure of their brains to handle it. They’d rather not try something and fail at it, because that would just prove that they aren’t “good” or “smart.”

In other words, boys play games they can’t win because they believe that they can figure out how to win with enough effort. Girls stop playing when they can’t win. You know, like I do.

I’ve been this way for so long that, even though I recognize the logic here, I’m not sure I can change. I’m not sure I can find the confidence to try something I might not be good at, to publicly fail, to “set myself up” for potential embarrassment. But I think I’d like to teach my girls a different way. So from now on, I’m not going to praise my kids for being smart – I’m going to praise how hard they tried. I’m going to link their success to their exertion, and I’m going to make their effort, not the grade they get, the goal. Whenever possible, I’m going to make them play a game they can’t win. Because, hopefully, I’ll be able to convince them that not winning today doesn’t mean never winning – that every loss will bring them closer to winning one day.

On that day that they win, I will cheer. I will be proud of them. And, probably, I won’t ever play with them again. Because I really can’t handle losing.

If you haven’t entered the BOY PROBLEM Giveaway, today is your last day! Click here to enter.

19 comments on “Nerdy Chicks and Losing”