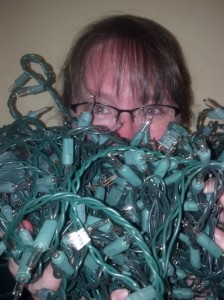 The first item to go. I got these down to decorate for a party and never put them back in the attic, so do I really need them?

The Minimalist Challenge. I’m doing it. I’m totally doing it. Who wants to meet my challenge? Wait. Did you hear that sound? That primal cry? Don’t be alarmed. It’s just  the sound of unadulterated joy escaping my husband’s surprised lips. He’s wanted to clear out the house for years. See, he knows I have a problem getting rid of the following:

1. Anything sentimental, which means anything that belonged to my grandparents, AND
2. Anything my children have ever made, worn, read or played with.
3. Anything that can be made into any other thing by way of crafting.
4. Anything  that used to work, and could possibly work again.
5. Clothes that I might fit back into some day.
6. Books.

Hey, that’s not such a long list. I mean, how much stuff can you really accumulate when your “to keep” list is only six items long?

Turns out a ton. Maybe a few tons. With stuff spilling out of every closet and across the floors, my home has reached its saturation point. Which is why when I heard about the Minimalist Challenge, I knew I needed to embrace it.

What is the Minimalist Challenge? Basically, you get rid of one thing on the first day of the challenge, two things on the second, three things on the third, etc.  So before I become a candidate for the next episode of Hoarders, I’ve decided to pick up the gauntlet.

The bloggers who originally issued the challenge (aptly named The Minimalists) designed it to begin on the first day of the month, but I say you can start it any time you get desperate enough to get rid of potentially useful or desirable stuff.  For me, that day is today.

The Minimalists explain on their blog that they were both making six figure salaries but found they were unhappy with their cluttered lives, so both gave up their butt loads of crap (sorry, I really did have to go there) to  become minimalists and seek happiness from living more, writing more, and accumulating less. You can read more about them HERE.

Unlike the self-proclaimed Minimalists, I am not leaving a six figure job to claim minimalism and thus happiness. Anyone who has ever met me knows I’m a pretty happy person already. (Hey, maybe that’s because I don’t have a six figure income! Maybe living on a dime is a GOOD thing. What a relief.) So while I don’t fear that my possessions are getting in the way of my happiness, they are getting in the way of my sanity.

Rather than go happily insane, I’m accepting the challenge. If you want to meet the challenge with me, (or offer encouragement) comment below or send me an email. 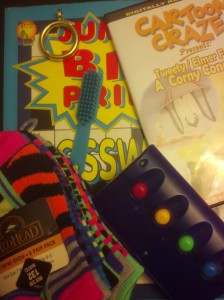 Update -Day 5: Still on target and plowing through the stuff. I decided to count both big and small items… otherwise the clutter doesn’t really get cleared.

33 comments on “The Minimalist Challenge”