There are many different things we write about on this blog. Parenting, writing, books, relationships – there are many topics we turn our nerdy eyes on. Today’s post, however, is about something we don’t always mention: the unexpected value of intellectual curiosity.

I’m the proud mother of three very, very nerdy chicks. The piece you’re about to read was co-written by one of my little nerds and me. It’s topic I would never have thought to research, and yet I’m eternally grateful that she did. This post is entirely accurate – all the historical events described are real and documented. It may not change your life – but I’ll bet my bottom dollar it will brighten your day.

So without further ado, I give you…

In Which Some Emus Beat the Whole Australian Army

Where A Bunch of Large, Flightless Birds Outsmarted the Entire Australian Population) 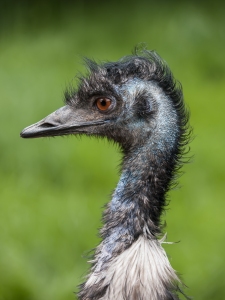 By William Warby (Flickr) [CC BY 2.0 (http://creativecommons.org/licenses/by/2.0)%5D, via Wikimedia Commons

Can you imagine a real life situation in which an actual army waged a war against a bunch of flightless birds and lost? It happened. It was glorious. It was the Great Emu War.

The Great Emu War of 1932 began in Western Australia. Farmers who were struggling to harvest their wheat were suddenly beset upon by as many as 20,000 emus. These merciless creatures ate or spoiled the crops and the farmers’ very way of life was threatened. The government needed to do something.

Instead of engaging the emus diplomatically and pleading for a cessation in dining, Australia’s then Minister of Defense, Sir George Pearce, deployed the Royal Australian Artillery to deal with the emus. With this act, the Great Emu War had officially started.

On November 4, Major G.P.W. Meredith established an ambush near a dam. When around 1,000 emus got into range, the gunners opened fire. Only twelve birds were killed, as the gun jammed. The emus got their revenge for November 2 that day. They all but delivered themselves on a silver platter to the army, and they still evaded capture or death.

Over the next four days, the armed Australians continued to engage the emus. One such attempt occurred when Major Meredith mounted guns on a truck to chase the emus. The truck, however, couldn’t move fast enough. Yet again, the emus outsmarted the army.

All the disastrous attempts by the armed Australians to counter the emu offensive between November 2 and November 8 resulted in 2,500 rounds of ammunition being fired and yet only about 50 birds eliminated.  The one saving grace was that no Australians died in any of these military actions.

On November 8, the guns were withdrawn. The emus appeared to have won due to their guerilla tactics: splitting into small units so that the machine gun usage would be uneconomic.

The Australians, however, were pure at heart and strong in spirit, and resolved to meet the foe again on the battlefield. Since the emus continued to “attack” crops, the Premier of Western Australia, James Mitchell, supported renewed military assistance to deal with them. By November 12, Sir Pearce approved even more military efforts. The soldiers were necessary to combat the incredibly serious agricultural threat of the large emu population.

On November 13, the military attacked once more. The tide seemed to have turned in the humans’ favor – 40 emus were killed that day. Yet the very next day, the soldiers were less successful, if you can imagine that. By December 2, the Army was eliminating 100 emus per week – and yet fewer than one thousand of the emus had been killed for the 9,860 rounds that had been expended. It took approximately 10 bullets to bring down each emu, which was pretty pathetic for a professional army. The soldiers were recalled on December 10 – the day the Great Emu War had come to an end.

The farmers called for more war on the poor, flightless emus. There was a pervading fear that the emus might mutate or evolve to have opposable thumbs – and then the dastardly birds would be unstoppable. (SBQ: Ok, this last sentence is totally untrue, but given everything else, it doesn’t sound too far-fetched, does it?)

To show the great respect the emus had earned, the Australian government honored the species on a stamp.

The government, however, had had enough of being embarrassed by the mighty emus.

The emu victory was clear. They had managed to outwit the Australian army over the course of only 45 days. Using their extraordinarily inferior intellect, they evaded the Australians’ attempt to stop their pillaging of crops. The lesson to be learned from the shortest war against a flightless non-mammal in world history is to NEVER underestimate the emu. They always win.

11 comments on “Emus and Intellectual Curiosity”